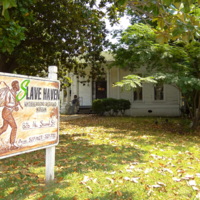 The Slave Haven Underground Railroad Museum opened in 1997 on the Burkle Estate- an historic house in Memphis. Originally built by a German immigrant, Joseph Burkle, the building is thought to have been part of the Underground Railroad, offering safe harbour to the enslaved on their escape route through the USA to Canada. Made up of period, nineteenth-century room settings, the museum documents the history of the Underground Railroad and the possible role of the house in that network. It also features displays about the system of transatlantic slavery, slave auctions and the everyday life of slaves in the wider Memphis area using collections of artefacts and archival material, including many advertisements from slave auctions.

The site's main feature is its secret cellar and trap doors that are thought to have offered refuge to runaway slaves. Visitors are invited to step down into the cramped cellar and kneel on the brick floor to get a deeper understanding of the plight of the enslaved. The museum also conducts guided tours around the site and the local area, highlighting the broader history of slavery in the USA.