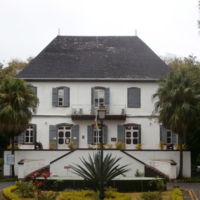 The National History Museum of Mauritius opened in 1948. It is housed in an French colonial villa built in 1772 that was formerly used as a military hospital, a naval museum and the Museum of Historical Souvenirs. It is managed by the Mauritius Museums Council, under the governance of the Ministry of Arts and Culture. The museum explores the social and cultural history of Mauritius; from its discovery by the Portuguese at the start of the sixteenth century, through its successive colonisations by the Dutch, French and British, up to the end of the nineteenth century.

The first floor of the museum exhibits the Dutch, French and Anglo-French wars. Each room explores a different era with artefacts from the period; these range from furniture and decorative arts to weapons, maritime equipment and ceramics.

On the second floor of the museum there is an exhibition dedicated to the British rule of Mauritius, from 1810 until 1968. The interpretation examines the transformation of Mauritius from a maritime economy to an agricultural one, with a key focus on the production of sugar. Alongside this is a discussion of the use of slavery and the development of the slave trade, indentured labour and Indian immigration. Artefacts here include agricultural tools, paintings and drawings depicting the changing landscape and the workforce, and archival documents.