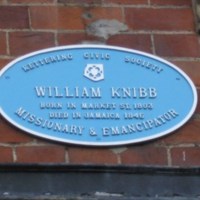 Manor House Museum in Kettering, in collaboration with local community groups, produced a touring exhibition which explored Kettering's involvement with the anti-slave-trade movement and issues of modern day slavery. The museum focused in particular on the life of ​William Knibb (1803-1845), a missionary from Kettering who taught slaves in Jamaica in the 1820s against the will of local slave owners and toured Britain speaking out against slavery. The museum produced a loans box containing material relating to Knibb and continues to have a permanent display dedicated to the missionary.