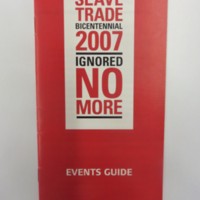 Abolition of the Slave Trade Bicentennial 2007: Ignored No More

The Greater London Authority produced an Events Guide for Londoners in 2007 detailing some of the initiatives taking place in the capital involving the Mayor. This included Africa Day on Trafalgar Square, celebrating the positive contributions of London's African communities, and 'Rise: London United', an anti-racist music festival. The conference 'Faith Symposium: In God's Name?' at City Hall examined the role of the Church in the transatlantic slave trade. There was also a seminar on the legacies of the transatlantic slave trade from a Caribbean perspective and a Caribbean Publishers Book Fair held at London Metropolitan University. The Dr Eric E. Williams Memorial Lecture Series at City Hall was made available as a webcast.