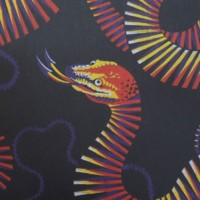 Into Africa was an exhibition held at the Dorman Museum in Middlesbrough, which examined the textile collaboration between Britain and West Africa after the abolition of the transatlantic slave trade. The exhibition focused on the textile samples of Christopher Dresser, the most prominent industrial product designer of the Victorian period. The samples were originally made for European markets, but increasingly became popular in West African textile trades in the late 19th century. The exhibition placed the samples in the context of African textile history, the Lancashire cotton trade and modern day exports.