There are an estimated 328,000 people living in conditions of slavery in Kenya (GSI 2018). Men, women and children are subjected to exploitation amounting to modern slavery in forced labour and sex trafficking. Children are often subjected to forced labour in domestic service, agriculture, fishing, cattle herding, street vending and begging. They are also victims of commercial sexual exploitation throughout the country, in khat cultivation areas, near gold mines and along the highway and Lake Victoria. Moreover, those residing in Kenya's largest refugee camp Dadaab are often vulnerable. Men and women are often lured by employment agencies offering attractive job opportunities, then find themselves trapped in domestic servitude, massage parlors and brothels or forced manual labour.

Sophie B went to live with her Uncle after her father lost his job. Rather than taking Sophie to school as he had promised, her Uncle forced her to work as a domestic in his house. She was forced to care for her cousins and do all the house work, being subjected to physical abuse daily. 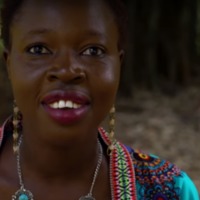 My past has shaped me but it doesn’t define my future. This is my story.

My name is Sophie A’Kinder and, like I say I’m called many things but I like calling myself a teacher, a feminist and a survivor advocate. My story of trafficking begins with my dad losing his job. He thought that I should go to school and when we lost everything he sold the last thing he had and that was the car because I was supposed to go to boarding school. My uncle had just come to visit and he was living close to where the school was so my dad thought, and my parents thought that to save money, they should give him the money they had just gotten so that he would take me to school.

So he took me to his house, it was on a Friday, and I was supposed to report to school on Monday. Everything was normal that weekend. Nothing was out of place. I thought Monday I was going to school. Monday came, I didn’t go to school. Tuesday came, I didn’t go to school. That happened the whole week and I realised, you know, that something is wrong, and things are not what I think they are. And all of a sudden everything that my mother had bought for me to go to school was taken and they started using it. The next time I asked whether I was going to school, my uncle hit me and they told me to shut up. I didn’t know what to do. I was in a place that I didn’t know and here I was with people that I thought were my relatives. And all of a sudden everything has changed.

That experience, that began the whole 9, or almost 1 year of the most painful part of my life, because I didn’t go to school. My uncle and his family made me work for them as a house help. I took care of my cousins and I cooked for them, I washed for them. I was physically abused almost every single day, sexually abused in the house almost every single day. I thought about suicide so many times. I cried, I fell sick and no one took me to hospital. I lost so much weight, I, literally my physical appearance literally changed from the experience. And I couldn’t leave because they lived in a house in the middle of nowhere with a gate and no one to talk to.

At some point I even remember not even being able to cry because it was so painful. For me that was the first time I was introduced to injustice, you know, like real people, people that you trust and believe, and just being mean. And it completely changed my whole aspect of life and I had so many things that I wanted to do but I knew at that at 13 years of age, I knew that I wanted to make sure that no other person went through what I went through.

And I normally say that my story is not unique. There are so many African children, so many Kenyan children that have a similar story, so I’m very careful about me ensuring that we understand that this is something that is happening and it’s something that is happening because we’ve allowed it. So many people allow it to exist. I do what I do because I know that there are people who are going through that. And every other survivor that has gone through what I’ve gone through, I just want them to know that there are people who care, there are people like us who believe in them.

I’ve lived a full life, you know, after the experience. And all survivors should be able to get that chance.