The Global Slavery Index 2018 estimates that there are 2,640,000 people living in conditions of modern slavery in The Democratic People’s Republic of Korea (North Korea). Men, women and children are subjected to forced labour and sex trafficking. Government oppression in the DPRK prompts many North Koreans to flee the country in ways that make them vulnerable to human trafficking in destination countries. Many of the estimated 10 000 North Korean women and girls who have migrated illegally to China to flee abuse and human rights violation are particularly vulnerable to trafficking. Some lure, drug, detain or kidnap North Korean women on their arrival, others offer jobs but subsequently force the women into prostitution, domestic service, or forced marriage. If found, Chinese authorities often repatriate victims back to the DPRK where they are subjected to harsh punishment including forced labour in labour camps or death.

Yeonmi Park was 13 years old a broker offered her and her mother a chance to escape starvation in North Korea to China. However, when they arrived Park tells of how the first thing she saw was her mother raped. Both Park and her mother were sold to Chinese men as brides. Park was able to escape China to South Korea by crossing the Gobi desert. She is now studying at Columbia University in New York and runs a non-profit organisation to save other girls trafficked to China. 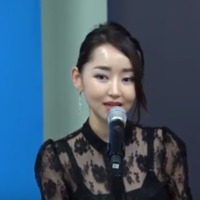 Thank you. Thank you everyone for coming and having me here. Erm, it, it was quite a journey to be here, coming here. When I was escaping I didn’t know I was going to end up here at the UN in New York and sitting next to Mr Forrest.

I grew up in a very average, normal family. I had one sister, I had a very both loving parents. And as Mr Jung said, I did not know that my country was isolated. You know if you know that you’re isolated, that means you’re not isolated. That is complete blockage of information, there’s no internet, there’s not 24 hours of electricity. I didn’t even know that passport people can have and leave the country, and there isn’t a map of the world. Also of course I had no words for my status, which I was a slave to the regime.

But when I was 13, in 2007, I faced starvation, I was very hungry. And in March I was really having stomach pain and my mother took me to a hospital and in North Korea we don’t have machines to examine what’s wrong with you. The doctor just touched my belly and that afternoon he said ‘you have, actually appendix, we have do the surgery on you’. So he cut my belly that afternoon without any anaesthesia and he removed my appendix, even though it was just malnutrition and infection. He closed my stomach that afternoon and we don’t have bathroom inside a hospital, we have to go walk outside to the bathroom. On the way to the bathroom there are like piles of human bodies. And you know, when you die when you’re being a corpse, the first part of the rats eating you is your eyes, they eat human eyes and they eat all our parts. But we are so hungry so we eat those rats back. They have disease and they kill us. My mother asked the nurse, why are they not moving those dead bodies? She said ‘we do not have gas to remove them’. That’s when we realise if you and I do not escape, you’re going to be like those people who are eaten by rats.

As soon as I got out the hospital the next day, we found a broker who wanted to send us to China. I do not know why she wanted to help me to go to China, I simply wanted to go because if I don’t leave North Korea I’m going to die from starvation. Er, once we crossed the frozen river with the broker who sent us, they first thing I saw was my mother being raped. I was 13, but this Chinese broker said he wanted to have sex with me. In North Korea there is no sex education, so I did not know what that was. My mother offered herself and after that we realised that Chinese guardmen, once we escaped to China, they don’t protect us as political refugees, they catch us and they send us back. So, what we do, we were sold. We had to force marry Chinese people. My mother was sold for over $60 in 2007 and I was sold for over $200, because I was a virgin and I was young. From them man who bought me I learned that if I go to South Korea I could be free, and that meant crossing the Gobi desert from China to Mongolia. It was 2009, we had 8 people in our team, I was walking across the desert. I was 15, but I think the scariest thing for me that night crossing the desert was not even getting killed. It was being forgotten, that no one knew I existed in this world. And from that desert I did make it to South Korea, and I came to American to study at Columbia University two years ago.

I think that’s what this index does. That this index makes us visible. That it shows that to the world that we exist. There’s over 40 million people that we estimate to be slaves. These are not numbers, it could be anyone. It was me, it was my mother, it was my sister. Even to this day now there are 300,000 North Korean defectors in China, and 90% of them are being trafficked. They are being sold by Chinese men for a few hundred dollars. And I do ask humanity again, because when I went to South Korea, I learned this concept like animal rights. And we talked about equality and we talked about so many things, and people told me very thoroughly that we went to the moon and we are planning to go to mars. I just couldn’t believe that as a humanity, how can we answer these women or people? If we have money, if we have intelligence, if we have technology to go to mars, we can’t even go to North Korea. We haven’t explored our earth yet and we are spending money and energy and resources to go to mars? I mean we should, but we should take care of human beings first. These people simply were born in the wrong place, and that’s what they’re being punished for, for their birthplace. So I think this is a significant step that we are taking because we are making these forgotten people visible to the rest of the humanity and everyone should have answer when people are free and they ask us what have you done for me? [crying] I mean we should tell them we did something for you guys.

So thank you for taking this step, and I know so many people are inspired by animal rights, going to mars, I hope somebody will be inspired by human beings, and we do make it one of our agenda to free human beings. No more slaves in our next generation.

Thank you so much, I’m so sorry.

To answer the second question first, since I spoke out publicly that I am being denounced by Kim Jong-Un. He attempts to kill outspoken people, I mean he killed his half-brother in Malaysia, he obviously doesn’t care what people think. So I, I am on the black list of the regime and all the rest of my family in North Korea have disappeared, I do not know if they got executed or sent to a prison camp. So my father and mother’s side are both disappeared completely. That’s why it’s still bad for me even though I’m in New York that still that they are trying to silence me. And this is why you don’t see a lot of North Korean defectors speaking up, because they are risking their lives, as well as risking all their family’s lives back in North Korea.

I’m a very optimistic person, if not I would not be here today. I think what kept me going when I thought I could die in that moment, was that you know, nothing is forever, that’s what history taught us, nothing is forever. And I believe that this slavery is not going to be forever, we will end it, and it’s gonna be like… I mean when you look at our whole human history, it’s going in the right direction generally. We did not have this concept of human right you know, a few centuries ago, it’s very recent thing. After World War II we started the UN, we came up with a peace and that’s what I see with North Korea, that the regime will end and that’s what I see with survivors like Mr Jung and other survivors are doing. They are not going to be silenced even though the dictator is still trying to kill us and silence us that I think, that’s what I personally want to do. I want to let everyone know what is happening and even now while we’re safe in New York, girls like myself are being sold in China for a few hundred dollars and simply we can stop it, and that’s what I do with my non-profit. I rescue these girls from China to safety and I keep trying to challenge Trump and any politician who does not want include human rights as one of the main agendas. And I hope as you said that media does play a big role. Until even a few years ago, North Korea was a joke. Media was busy making fun of Kim Jong-Un’s haircut. Seriously, that was the main news. I couldn’t believe that, what’s so funny about this dictator? What is so funny about people getting killed? And I think now finally we are going towards the right direction, we know this is not a joke, and we know this is happening and we can stop it. So I really appreciate that. As a media you have a power to redirect this conversation that this is not funny and this is something that we need to work on right now. And it should come above anything that we are doing in this free world.

As told at a United Nations Correspondents Association press conference, with the Walk Free Foundation to launch the Global Slavery Index 2018.