Mira decided to look abroad for work after her mother died. Her brother-in-law told her she could do housework in Lebanon and arranged for her travel. However, arrival her passport was taken and upon meeting her employer she learned that she would not be going housework but caring for their mentally ill mother. Unprepared and untrained for such a job, Mira was told she couldn’t leave until her employer’s mother died. She was forced to work in Lebanon for four years before she was allowed the return to Nepal. 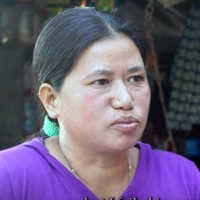 My father died. My mother used to do everything at home. She was managing our home. She used to provide uniform, books, notebooks and everything for our school. This is how I managed to study up to lower secondary school but I failed in my school leaving certificate at 10th grade. Then I started to take care of cattle and household. My mother died 10 years ago. I decided to go abroad to work after she died. I had my brother-in-law, Giri. I told him that I wanted to go abroad for work. He told me to go to Lebanon. It was him who sent my bags and luggage to India. I thought he would take me directly from Delhi to Silgadhi but he kept me at his sister’s home for a day. He took me to the station at 5 in the evening. We got into the train at 9pm. In the train I could not sleep. I was anxious about what was going to happen next.

My brother-in-law told me that there would be a direct flight from Delhi and that I would reach Lebanon at 10am. But the flight was not to Lebanon, there was transit in Abu Dhabi. I rested at Abu Dhabi airport and then went to Lebanon. When I reached the airport, they asked me for my passport. I gave my passport to the airport officials. After they took me to a big room but there were many women in that room. I wondered, why have they taken me here? Why are there so many people here? I was very afraid. I could not understand a word as I didn’t know the language and didn’t know how to communicate with them. Employers would come, call their employees’ names looking at the passports, and take the other women who were waiting to go to their homes. Everyone was gone. I was the last one to go.

I was so afraid at that time. What will happen? What are they going to do to me? Why isn’t my employer here? I waited there for 9-10 hours. It was 8pm. My employer arrived and asked me if he was later. I replied that he was. I told him that I had waited for long enough. He said let’s go. I put my bags in the car. He took me to the agent’s office. It was completely dark by the time we reached the office. It was nine o ‘clock. He asked me what I wanted to work on. I had been told that I would work at a house. I came here to work at a house, I said. The agent told me, “not it’s not a household job”. Thee is an old lady and you have to look after her. Okay, I told him that it was fine. Then he took me to my employer’s home. What do I need to do here? I asked. And they said, “you have to look after this lady. She is mentally ill”. I was totally shocked. How would I look after her?

At that moment, I thought, I am not going to stay in this place. I thought, if anybody could take me back to Nepal, I would rather work for them. I had no other option. Who would I ask for help? Where would I get support? Next day, they asked me to wake the lady up and help her take her shower. I couldn’t understand a single word nor could I carry her. I was in deep trouble.

During my four years stay in Lebanon, one day this lady threw all her food in the toilet. Her daughter-in-law saw this, she said to me, “Mira, my mother-in-law has thrown her food in the toilet”, and asked me to take it out. She gave me gloves to wear and I had to clean that. When I was trying to clean the toilet, the old lady punched me very hard on my back. At that time, I felt that I had made a big mistake by taking the responsibility of this lady. I had never been beaten like that before. I felt very sad and it made me cry. Obviously if feels bad to be beaten by others for no reason, doesn’t it?

As my employers were good and they were providing good food and clothes, I didn’t bother about what had happened to me. I was thinking of returning back home after two years. They would say, “you can return only after my mothers dies”. When is your mother going to die and when will I go home? I used to ask them. She could live for much longer! This is how I spent four years, hoping to be sent home soon. I got my remaining salary for one and a half year. He also gave me an additional 200 dollars for shopping. Then I got my bag, some clothes and other stuff. They left me at the airport and I came back to Nepal.

After arriving here at home, I took a walk around the village, I saw everybody. Those sisters who are going to Lebanon should first learn the language before going there. After learning the language, you should learn how to operate things in the kitchen. Learn to wash clothes in the washing machine. It is better if they learn all these things before going.

As told to Anti-slavery International