Menuka was looking to support her family when she decided to travel from Nepal to Lebanon to find work. Upon arrival in Lebanon, Menuka’s passport was taken from her and she was taken to provide domestic work for a family. 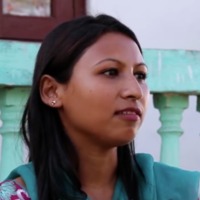 I returned back from Lebanon after staying there for six years. In my neighbourhood there was a person whose son used to stay in Lebanon and I was told that he would send me the visa, that’s how I went there. I was told that I would get 10 thousand rupees for a month but after arriving there I found out that the salary was only 7 thousand rupees a month (100 US dollars). But they raised it and gave me 125 US dollar per month because my English was good.

I went through India and I was alone. At that time I went there without even thinking about my life, my age, education. I didn’t know anything. I had never even been to Kathmandu at that time. But I gathered enough courage to go and work in that new unknown place. I was very much scared as I didn’t know what kind of place it was, who will come to pick me up, what work I have to do, how will I do the work! In other words I was totally in the dark.

Though I didn’t have any skills I was quite confident, as I knew English Language and I also knew that people there would speak and understand English. Other than that I had no trainings or skills and even didn’t know what kind of domestic work I had to do there. I was thinking of going abroad for work, but I was not educated enough, that I why I took English language training for about a year. That helped me boost my confidence as I could understand and reply back in English. Even though I didn’t know any household work, I had that confidence.

Once I reached Beirut airport, I had to give my passport to the airport officials. I didn’t know who, when and how the person will come there to pick me up, so I asked other girls who were also waiting like me. They told me that the airport officials will allow us to go only with our employer. All those girls were picked by their employers and at the end I was the only one left there. After that time, I didn’t know what to do, I didn’t know anyone there and I also didn’t have anybody’s number to make a phone call.

Later, at around 10pm they called upon my name. I saw my employer who came to pick me up and I went to their home. I used to get rest for two hours after doing all household work. As they ate full meal once a day and ate leftovers for dinner I had to cook once a day. I also used to eat whatever was there and also used to make some food for me with cheese. They provided me everything, money to call home and things like body lotions, shampoo and other things for my own use.

I used to ask for my salary at 5 or 6 month gap and I used to send it over my home, it was okay. After staying there for four years I told them I wanted to come home to see my family and they asked whether I want to take a holiday or leave the job. I told them I wanted to take a holiday, so they paid for my ticket. Later, they sent me in a good way. They bought gifts for me to take home.

I am thinking about going back to Lebanon. If I go again, I will get a labour permit from the government and go from Nepal’s airport. I am completely sure that I would not have any problem. If I go again, I won’t go from India, as I did before I will go from here, my own country.

As told to Anti-Slavery International