Lebanon is a destination for Asian and African women trafficked for the purpose of domestic servitude, and for women from Eastern Europe and the Soviet Union trafficked for the purpose of commercial sexual exploitation. Lebanese children are trafficked within the country for the purpose of forced labour and sexual exploitation. Women from Sri Lanka, the Philippines, and Ethiopia who travel to Lebanon legally to work as household servants often find themselves in conditions of forced labour through withholding of passports, non-payment of wages, restrictions on movement, threats, and physical or sexual assault.

Kamala was looking for work to sustain her family when she decided to travel to Lebanon. While she was treated well initially, her employer became abusive, locked her in the house and  forced her to work long hours with no breaks and no pay. 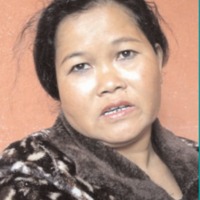 With no money it was hard for me to find a job and sustain my family… This is why I went to Lebanon, but my expectations were not fulfilled.

They treated me well for three years, but I don’t know what changed later, as my employer started becoming very abusive and authoritarian. She used to lock me up in the house and also used to shut all the doors and windows. I used to feel like a pig, bred to be slaughtered. I was ordered to wake up at 4 in the morning and sleep at 1 at night. I used to keep awake by ironing my master’s clothes.

I used to work day and night without complaining, but every month when I used to ask my employer to grant me my salary, she used to frown and get irritated… I was so frustrated and I demanded to be taken to my agent who had placed me here, to which my employer frowned and states that they agency that had recruited me was no more in business. I felt numb and cried loudly…

My employer used to shut the doors, so that no one could hear me crying. I had phone numbers, but I was even deprived of all connections. I felt like a prisoner in my employers house – cut off from the outside world.

I still remember the day when my employer hit me on the face when I demanded for my salary. My face was swollen and it hurt a lot… I used to shiver with the thought that I would die in here, and it was not in my fate to return back to Nepal.

As told to researchers at Anti-Slavery International for their report 'Into the Unknown: Exploitation of Nepalese Migrant Domestic Workers in Lebanon'