The United States is a popular destination country for people searching for job and education opportunities and a better life. Labour trafficking exists in multiple forms including domestic servitude, forced labour in agriculture, fishing, and construction across the United States, with domestic servitude being one of the most difficult to detect as traffickers are able to keep people isolated and intimidated. Among those trafficked for domestic servitude in the US are children, lured to the US with the promises of a brighter future.

At 9 years old Evelyn Chumbow was presented with an opportunity to travel from Cameroon to the United States to receive an education. Dreaming for the best for their daughter, her parents packed up her belongings and put her on a plane with a Cameroonian recruiter. However, when Evelyn reached the US she was forced to cook, clean and take care of the children of the recruiter. Never paid for her work and subjected to daily beatings Evelyn never received the education she was promised. After 7 years of domestic servitude, Evelyn was able to escape. She is now a vocal survivor activist working to raise awareness and educate on modern slavery. 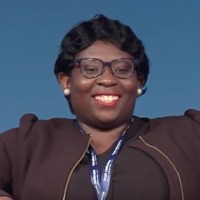 So again thank you, I’m honoured to be here and as a fan of Trust Women I had to do this. Erm my name is Evelyn Chumbow, I am a survivor activist for Inside Human Trafficking. So erm again most of you probably know me, and most of you don’t. I was trafficked from the age of nine until seventeen and erm the promise was to get a good education. Again, I just wanted to marry Will Smith [laughter]. And I wanted Bill Cosby to be my dad. But that didn’t happen, that American dream was completely gone so it wasn’t like The Cosby or the Fresh Prince of Bel-Air or 90210. Instead I became a domestic servitude in a house taking care of two children, cleaning and cooking and no schooling from aged nine until seventeen. And you know, being abused everyday mentally, physically and thanks to a lot of great people I got help. You know, I am now an advocate around the world and in the US so I am honoured to be here, thank you.

Erm, first I want to say, it’s really funny because looking back at my situation, and one other person that was like the heart of my situation is actually here, you know Melanie on heart, my lawyer. So she was in the beginning of everything and I owe her a lot of gratitude.

So post-trauma, and especially in our current situation, I hate this term illegal immigrants, I really do. Because when you talk about illegal immigrants, especially when it comes to children, you have to wonder how the children got here. So I’m an example of an illegal immigrant, an undocumented child. I came here illegally which I did not know. I did not know. I did not know that I need a green card to be here. I did not know I need a working permit for me to be here. Again, I came here at the age of 9 for a promise to get a better education and, then when I came here that was not the promise I got. You know, I end up cooking and cleaning, taking care of kids, being abused physically and mentally, and one of my punishments, I had to take off my clothes and get beat, beaten. One of my punishments again I had to stand up from like 10pm to like 5am in the morning. You know, and no school education, no contact with my family members. And you know, afterward you know, I decided, you know, I ran away. I was trafficked twice. Once by my trafficker and once by a family member. So I ran away, went to a church, went and told my story to a church and from there, everything was happening. Law enforcement and FBI were right there which, we’re working on it but thank you.

They were right there and you know, asking a lot of questions, you know. Especially for someone who did not know that I needed green card to work in a country. Like ‘oh you’re lying, you’re telling you’re story because you just want papers’ and for somebody not like, again, we don’t know any of that. We just want to see Will Smith [laughter]. So you know from there, magic happened. I got into foster care, I’m really grateful, you know my, my you know, my story got erm prosecuted by, prosecuted. Until they went all the way to Cameroon, you got investigate it, talk about it. But it was like what happened after. You get the green card, you get the working permit. What’s left? And I’m placed into foster care, which is another issue but because I had ‘somebody’ there that was always helping me. But it was really hard because life in foster care was another story of its own and again I couldn’t do a lot of things like other kids that were Americans.

Because I still didn’t have my documents, it was like a field trip to go to Canada, I couldn’t go because I didn’t have a passport. Which brings, you know, so it really pisses me off most of the time when they talk about illegal immigrants and undocumented kids because, most of us are trafficked here to this country. And we, we’re not asked to be brought here. And we’re just walking around, trying to figure out life. But I’m one of those undocumented kids that went by the rules. I pay my taxes [laughter], I graduated, you know, it took a while. [Laughter]. You know, I’m working at one of the greatest law firms ever Baker and McKenzie. And you know I’m also a voice to help this issue to make sure it doesn’t happen again. You know, and it’s just really, it’s just there’s a lot of work to do afterwards long term. You know as far as like they talk about bondage. We, we’re locked in a house, we have no issues of the outside world. We don’t even know about our taxes or how to get a job or how to get a lot of things. You know, a lot of the time most organisations focus on rescuing us. And first of all we should stop saying rescue [laughter]. Most of the time they work about rescuing us. What happens next? Now we, people know about modern day slavery, but now you got to think of post. What happens next? What is going after? Making sure we get our compensation like Martina is doing, yes. But you know there is just so much to do afterwards. And we’re grateful that you want to help us but let’s talk about what happens next.