Mexico has one of the largest child labour forces in Latin America with 3.6 million children between the ages of 5 and 17 currently employed in some way. This has made children one of the most vulnerable groups of people subjected to labour exploitation in the country. 42.5 percent of children working in Mexico do not receive any income for their labour. The current prevalence of poverty in the country has meant that many families require children to contribute to the household income in order to survive. Moreover Mexico is home to thousands of street children who constitute a particularly vulnerable group often subjected to forced labour and sexual exploitation.

Maria was taken by her aunt to a family for whom she was to provide domestic work. Though initially treated well, Maria was soon forced to work long hours, providing the family with anything they needed and cleaning up after them. Maria was also required to sell firecrackers at the local market, subjected to physical abuse if she did not manage to sell them. Eventually Maria was able to escape after telling a woman at the market that she needed help and calling the police. 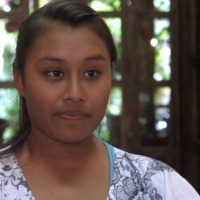 I was born in Guadalajara, Jalisco, with my mom. I was three years old when she died. And I went to live with my aunt and uncle for a while, but later my grandpa started to try to abuse me. He’d always tell me he’d give me money if I let him touch me. So once I told my aunt, but she didn’t believe me. She said I was lying, and that I was trying to cause trouble in the family. So then my aunt took me to a lady who had two daughters. The first week I was with the lady she treated me well, but later she became aggressive with me.

She started to treat me like a girl who worked in her house. I was like Cinderella at that house. I had to wash their clothes for the three of them. I had to wash the dishes and clean the bathrooms, clean the bedrooms. They had everything they needed. They had more clothes than me. I only had a little dress and a pair of underwear.

At night I had to take off my dress, wash it and wear it the next day. The daughters had their own beds and everything. We shared the same room but I’d sleep on a piece of cardboard. With no blankets of anything. That was all I had and…

I wouldn’t eat with them. Later, they’d finish their breakfast and I had to clear everything and wash the dishes and clean up, because later she’d make me go sell.

After a long time I got up the courage to answer her. To ask her why she did it if I was doing her a favor. So they’d have food. And she got really mad and she started… it was the first time she made me bleed. She pushed me into the bedroom and hit my head. And she told me to stay there.

So I lay down and started remembering my mom. And I started thinking that the next day I’d go out to sell and I wouldn’t go back to the house.

So that day I escaped. I ran off. And I told the woman who would always buy stuff from me that I needed her help, because the lady was mistreating me and I couldn’t take it anymore. So she said we had to go see the lady… with the police, to see what she’d do.

And the lady started talking to me sweetly, saying: “No, I don’t do that to you. You have everything you need here. I don’t know why you ran away. We never disrespect you here.”

And her eldest daughter said: “Mom, you’ve always mistreated her. The girl was right to run away.”

So that’s when the police and the woman realized it was true, besides the fact that I had marks on my body. Then the woman told me I’d go somewhere else, where I’d get an education, love and I’d become part of a family.

And since I’ve been there my life changed completely.

Now I’m doing very well at school. My dream is to be a flight attendant or a dance teacher.

When I see those kinds of children, I remember what I went through. And it’s sad for me to see them because now I’m in a better place. And I’d like those kids I see to have what I have now.

Maybe one day there will be peace in the world and no child exploitation. And children’s rights will be respected. Because they’re entitled to that as children.