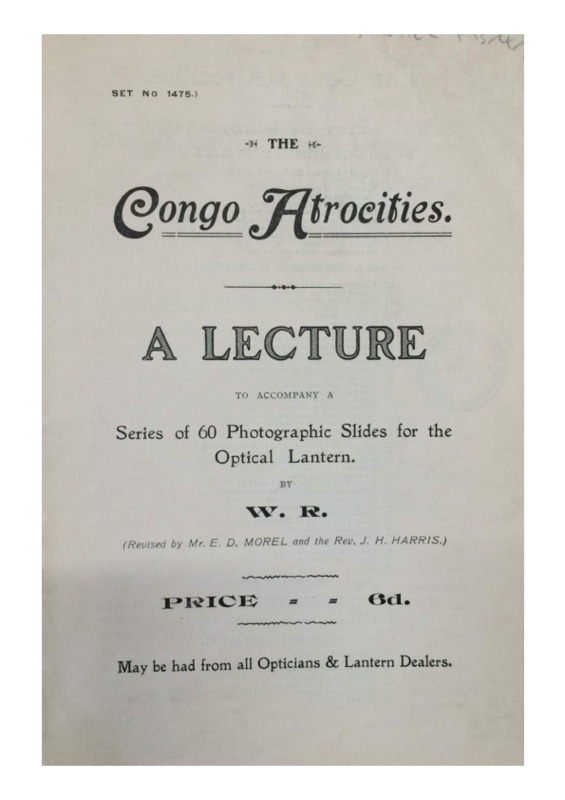 Download all the resources in this item as a Zip file.

Please contact the rights holder to use this resource.

The ‘Congo Atrocity Lantern Lecture’ was a campaigning devise used by the Congo Reform Association to raise awareness in Britain of the brutal labour regime which took place when the Congo Free State was the personal possession of King Leopold II during the period 1884-1908. The lantern slides included a range of images which represented different experiences of enslavement from transatlantic slavery through to conditions in the Congo Free State. Some of the lantern slides reproduced photographs taken by the British missionary Alice Seeley Harris which depicted the violence and mutilation inflicted on the local population in pursuit of rubber.

The Congo Reform Association was founded in 1904 by Edmund Dene Morel and Roger Casement to highlight the issue of exploitation in the Congo Free State. Despite their efforts the initial public success of the campaign had started to wane. In 1905 Alice Seeley Harris and her husband John returned from the Congo Balolo Mission where they had been posted and began to take an active role in the Congo Reform Association. The Harrises offered a solution for reanimating the campaign – a lantern lecture tour that would showcase Alice’s photography and incorporate elements of the popular missionary speaking tours that had been used to evangelise across Britain and the United States.

The lantern lecture shows utilized the popularity of the genre as a form of mass entertainment. Using missionary networks it was shown in chapels and meeting houses across Britain. The lantern slides were accompanied by a lecture which was delivered by the Congo missionaries. As the shows grew in popularity it became necessary to develop a standard narration that could be delivered by any speaker. The standard lecture focused on the idea that the Congo Free State represented a corruption of the spirit of empire rather than an acute symptom of a structure that was inherently unjust. The accompanying lecture notes made it clear that African people and their culture should not to be regarded as equal to that of the Europeans. The lecture expressed sentiments framed by a belief in Britain’s empire as part of the ‘civilising mission’ – this was an attempt to remake colonised people in the image of the coloniser. Far from anti-colonial the lecture reinforced the need to participate in the imperial project, particularly in relation to spreading Christianity through the establishment of more mission outposts.

The images have been tagged using generalised description of the individuals who feature in them e.g. ‘African child’ or ‘European man’. These terms are inadequate as they do not allow for the specificity that should be attributed to individual subjectivity, they also remove peoples’ right to self-definition. The captions for the images do not contain the detailed information about the sitters which would allow for a greater degree of clarity. Judging a person’s race or ethnicity based on a photograph risks wrongly attributing or imposing meaning, however, in order to make the archive searchable these terms have been used.

Each image has a zoom function will allows the viewer to examine the photograph in detail. If you click on the image you can navigate with the zoom to look at an individual’s stance, expression, and other details. Humanitarian photography has employed techniques which have tended to erase the individual and present a suffering mass. The zoom function has been included so that viewers can engage with the people represented as individuals.

Both the original ‘Alice Seeley Harris Archive’ and the ‘Congo Atrocity Lantern Lecture’ represented African people through the colonial gaze. In replicating these archives we are very aware of the potential to reinstate that particular way of seeing difference. In order to make sure that this mode of representation is balanced by material which is self-representative we have commissioned two projects ‘Decomposing the Colonial Gaze: Yole!Africa’ and ‘You Should Know Me: Photography and the Congolese Diaspora’. You can search ‘Alternative Tags’, or you can click through to these collections to find new material which has been inspired by and critically engages with the historic archive.

This archive would not have been possible without the generous access given to the project by Antislavery International. In particular we would like to thank Dr Aidan McQuade and Dr Anna Shepherd. The digitisation was completed by Autograph ABP. Thanks to the London School of Economics for their kind permission to reproduce the lantern lecture notes. Discussions about this project were greatly enhanced by conversations with Dr Mark Sealy (Director, Autograph ABP) and Dr Richard Benjamin (International Slavery Museum). Congolese artist Sammy Baloji offered unique insights into the relationship between past and present forms of representation. This project was supported by the Arts and Humanities Research Council. Further thanks go to the Antislavery Knowledge Network, based at the University of Liverpool.

There aren't any related items yet. Why not view everything in Congo Atrocity Lantern Lecture?