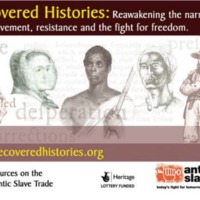 In the Recovered Histories online resource, Anti-Slavery International digitised and made accessible for the first time a collection of over 800 pamphlets dating from the 18th and 19th centuries relating to the transatlantic slave trade. The resource captured the narratives of the enslaved, the enslavers, slave ship surgeons, abolitionists, parliamentarians, clergy, planters and rebels. An accompanying touring historical exhibition and an education pack featured testimonies and pictures from Africans subjected to slavery, those participating in the enslavement and those who fought against it. An outreach and resources programme included a series of free regional seminars in April and May 2008, which encouraged dialogue about the transatlantic slave trade and its legacies by bringing together a wide range of groups and organisations who worked on these issues. The workshops were held in Bristol, Edinburgh, Leeds, London and Manchester. A series of short stories were published, inspired by the Recovered Histories resource.