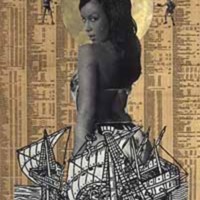 During the Industrial Revolution Nottingham was famous for the manufacture of lace. In 2007 British-Ghanaian artist Godfried Donkor, supported by The New Art Exchange and the Centre for Contemporary Art in the city, investigated the often-neglected connections between this luxurious commodity and the cotton picked by enslaved Africans in the Caribbean and American South. The research culminated in an exhibition, ‘Once Upon a Time in the West There Was Lace’, at the Yard Gallery at Wollaton Hall in early 2008. The Elizabethan manor is also home to the Industrial Museum which holds lace-making machinery. A key part of the display were outfits created from brightly coloured lace, now a prized material in West Africa. Donkor's paintings on pages of the Financial Times represented people, culture and goods crossing the Atlantic in different eras. The exhibition was accompanied by a series of public events which looked at the links between the city’s past lace-making industry and slavery, including lectures and a free symposium. 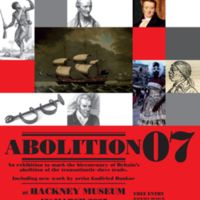