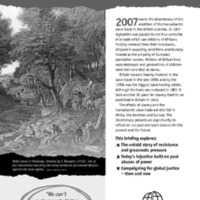 200 Years On: The legacies of enslavement and abolition

The World Development Movement seeks to increase awareness of political views in regards to world economic and social development. The organisation published a briefing in 2007 to mark the bicentenary, exploring the stories of grassroots pressure and the historic and modern campaigns for global justice. In collaboration with the University of Leeds, the World Development Movement also organised two public events looking to explore the lessons to be learned from the struggle to end the slave trade and examining contemporary campaigns in Africa and beyond for global social justice. Speakers included the Kenyan writer and academic Ngugi wa Thiong'o. 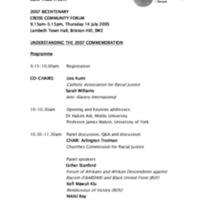 The main aim of the 2007 Bicentenary Cross-Community Forum (2007BCCF) was to facilitate space for dialogue and alliance building in areas of work connected to the legacies of enslavement, related global injustices today and contemporary forms of slavery. The forum was jointly convened by Rendezvous of Victory, Anti-Slavery International and the World Development Movement. The education initiative aimed to assist in discussion and alliance-building on issues arising from the legacies of African Enslavement such as Maangamizi (Afrikan Holocaust) Awareness, Afriphobia, reparations, global injustices today and contemporary forms of enslavement. Open meetings were held in London between 2005 and 2007, and the group produced the 2007 Cross-community e-bulletin three times a year, including comment pieces about the significance of 2007. Task Action Groups were set up, such as the Cross-Community Dialogue Action Group on Education (CCODAGE), jointly hosted by the Council for Education in World Citizenship and the School of Education at Kingston University. A Global Justice Forum was developed out of the 2007BCCF in order to advance work beyond 2007.