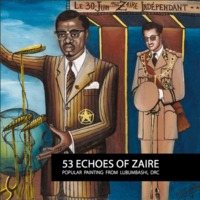 Popular Painting is a genre traceable to the 1920s, which chronicles contemporary social and political realities in Congo (then Zaïre). This art movement remains very little known outside the continent. Scholars have dedicated their research activities to Popular Painting. They often knew the main actors of the movement in the early 1970s, and shared this knowledge by publishing articles, books and exhibition catalogues. “ During a brief period between the late sixties and the late seventies, popular genre painting bloomed in the urban and industrial Katanga region of the Democratic Republic of the Congo Artists, most of them self-educated, produced paintings (acrylics or oils on canvas reclaimed from flour sacking) for local use. Through a limited number of recurrent topics, they articulated a system of shared memories.