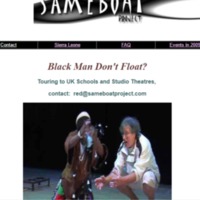 Black Man Don't Float? is a play developed by Sameboat Project, a not-for-profit organisation working in collaboration with the Pierian Centre Bristol, Gecko Theatre Ipswich, and the Arrow Project at University College Plymouth. Set in the ocean off West Africa, a white yachtsman collides with an African economic migrant who is trying to reach the Canaries in a home-made vessel. They have to co-operate to survive, but their differences lead to confusion. Performed by West African performer Ayodele Scott and UK-based writer and performer Martin Hubbard, Black Man Don't Float? was shown in the UK and then travelled to Sierra Leone. The show was accompanied by a workshop entitled Fair Share, exploring issues around the fair sharing of resources, and the challenges facing developed and developing nations in their negotiations about aid, trade and the exploitation of natural resources.