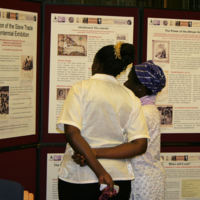 This exhibition held by the Cadbury Research Library: Special Collections at the University of Birmingham included material from the archives of the Church Missionary Society held there, and some of its rare book collections. The accompanying information boards are featured here. The exhibition focused on the role of religion in the abolitionist movement, the power of the African voice in literature, and the role played by Birmingham residents in the anti-slavery campaigns. A booklist on anti-slavery publications held at the library was also produced. The exhibition was part of a University-wide initiative, with additional involvement from academic departments and the Guild of Students. An online exhibition was also produced in collaboration with the Library of the Religious Society of Friends: 'Quakers and the path to abolition in Britain and the colonies'.