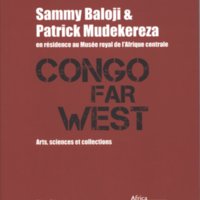 In this exhibition the artists Sammy Baloji and Patrick Mudekereza present us with a contemporary take on the colonial past. As artists in residence in the museum they got carte blanche in the museum collections. In dialogue with scientists from the museum they have started working with a few collection pieces dating from the beginning of Congo’s colonial history. These collection pieces exhale the atmosphere of the conquest of Congolese territory by the West. The leitmotif of the exhibition ‘Congo Far West’ refers not only to this territorial conquest, but also to the contemporary Congolese artists who artistically and intellectually recapture the collection pieces conserved in the West.

Patrick Mudekereza is a writer and poet but he also writes texts for comic strips, exhibitions and audiovisual art. During his time in the museum he is working on a hybrid sculpture entitled L’art au Congo which raises a whole host of questions, and treaties signed with a cross which sealed the transfer of land from the local chefs to Leopold II. Photographer Sammy Baloji is working on a series of photographs and watercolours from a colonial exhibition led by Charles Lemaire. He has already exhibited in cities such as Paris, Bamako, Brussels, Cape Town and Bilbao. A Beautiful Time, his first solo exhibition in the United States, taking place in the Museum for African Art in New York, will be on show in in the Smithsonian National Museum of Natural History in Washington in 2012. Sammy Baloji and Patrick Mudekereza both live and work in Lubumbashi in DR Congo. Together they are organising the photography biennale Rencontres Picha in Lubumbashi, the third edition of which will take place in 2012.