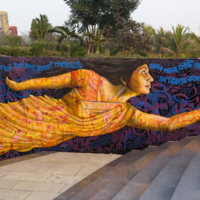 Together We Can End Human Trafficking

In the north of India, there lies a small city called Siliguri at the foothills of the Himalayas. While this region boasts stunning scenery and a rich mix of cultures, it is also known for something much more sinister: the epicenter of South Asia’s human trafficking crisis. Often lured by false promises of job prospects, thousands of women and girls a year are taken from here or brought from nearby countries like Nepal, Bangladesh, Bhutan and Myanmar by international criminal organizations, who then force them into prostitution in brothels across the country. Others end up in forced labour as domestic workers, while men and boys are enslaved in agricultural work. To raise awareness for this critical issue, the artist Joel Bergner (Joel Artista) partnered with four local Bengali artists, Anindya, Saptarshi, Santanu and Binod, to create a public mural as part of the International Anti-Human Trafficking Conclave.

The main image in the mural is inspired by a self-portrait photograph by Sangeeta, a young woman from this area who is a survivor of trafficking. In her photograph, she chose to portray herself with a hand grabbing her ankle while she reaches out to another hand for support. The artists then painted her sari filled with depictions of the stories of modern slavery. The mural, painted in a highly visible wall in the entrance to a shopping centre, plays an important role in educating the public about human trafficking. It aims to help residents to recognise it when it happens in their community, know who to inform, be wary of job offers from strangers, and support returning survivors, as they often face intense social stigma. This project was organized through the Indian anti-trafficking NGO Shakti Vahini, the Meridian International Center and the US Consulate in Kolkata. The conclave closed with a dance group of trafficking survivors performing in front of the mural along with other local performers, and speeches by dignitaries.