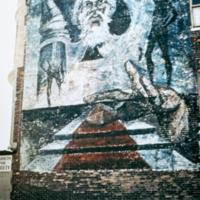 Muralist Al Smith painted the abolitionist Frederick Douglass as a mythic elder statesmen for this Boston mural. Douglass had visited Boston exactly 80 years, from May 28-31, 1888, when he attended the annual convention of the New England Woman Suffrage Association and delivered an address on Women’s Rights at Tremont Temple. “My special mission in the world, if I ever had any,” Douglass told his audience, “was the emancipation of enfranchisement of the negro. Mine was a great cause. Yours is a much greater cause since it comprehends the liberation and elevation of one-half of the whole human family.” 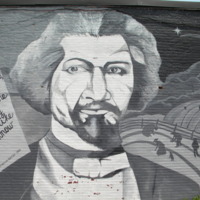 In 1860, Frederick Douglass took to the stage at Boston's African Meeting House to give his speech, “A Plea for Free Speech in Boston.” Muralists Deborah Browder and Heidi Schork transcribed words from the speech onto their mural at Hammond and Tremont Street. “Liberty is meaningless when the right to utter one’s thoughts and opinions has ceased to exist,” Douglass pronounced in 1860. Three years later, in the same Meeting House on Joy Street, Beacon Hill, African American soldiers, including two of Douglass’ sons, were recruited into the Fifty-fourth Regiment of the Massachusetts Infantry under the leadership of Colonel Robert Gould Shaw. 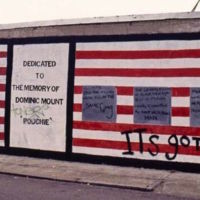 All in the Same Gang

In 1998, at the height of gang related murders in the city of Boston, Jameel Parker was commissioned to paint a mural by Gang Peace, a not-for-profit, street-based programme seeking to reduce the number of murders in Boston by redirecting youths into education and career-oriented activities. In 1992, around 600 local youths between the ages of 8 and 23 participated in Gang Peace programmes. Parker’s mural, titled All in the Same Gang, was painted in Boston and became a monument to those who had died as a result of gang crime. During its creation, on the corner of the street where the mural was painted – Blue Hill Avenue and Floyd Street – a young boy named Dominic Mount was murdered. Given the immediate community outcry following his death, Parker dedicated the mural to Mount and placed his name alongside heroes of Black history; Frederick Douglass, W.E.B. Du Bois, Malcolm X and Elijah Muhammad. By 2016, the portraits of the African American male leaders had faded and the mural had changed to now include four black women, includng abolitionist Harriet Tubman.